Russian divers on Lake Ladoga. It's a countdown.

For two years, the divers of the club “Divo” have collected all the information not only about the found vessel, but also about other steamships, that... 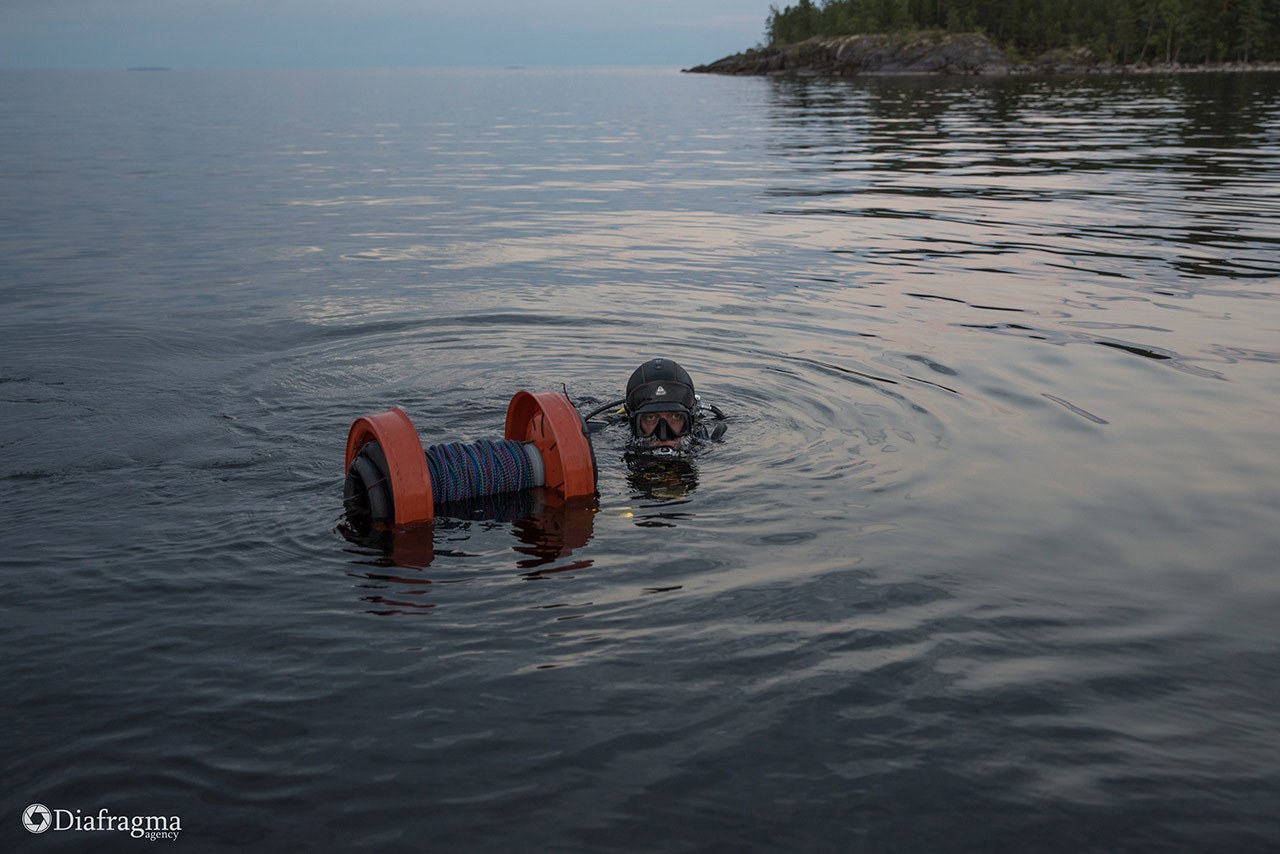 In 2017 divers of the Oryol club “Divo” were preparing on Ladoga for the expedition to the Каra sea to search for material traces of the disappeared Arctic Explorer and Navigator Vladimir Rusanov. He discovered on the Spitsbergen archipelago (Svalbard or Spitzbergen, Russian: < Шпицберген> is a Norwegian archipelago in the Arctic Ocean) and secured giant coal deposits for Russia. His bright life was cut short presumably in 1913 under unexplained circumstances when he was cruising on the ship along (then) the little-known Northern seа route intending to pass it in one navigation.

While mastering the methodology of working with search equipment – side-view sonar an unknown sunken ship was found in the Nikon Bay of the Valaam archipelago. Unfortunately, the end of the expedition didn’t allow to study the object. The steamship “Sergey” was found once belonged to the Valaam monastery.

In 2019, the second expedition was undertaken to identify the sunken object. For two years, the divers of the club “Divo” have collected all the information not only about the found vessel, but also about other steamships, that could be at the bottom of Ladoga. The steamship “Sergey” was sunk in Monastir’s Bay. It received minor damage and was raised by Finnish troops.

The object under study sank to a depth of 7-9 meters almost 80 years ago, but it was well preserved and turned out to be very promising in terms of a more detailed survey. During the expedition, fragments of dishes from the galley, a gimbal presumably from a gyrocompass and two navigation lights were found.

One of them has a plate with markings and an indication of the manufacturer`s factory. From the exposed buoys and aerial photography, it was possible to determine the true course of the ship.

Under the water the length and width of the ship, the height of the Board in the area of the engine room were calculated.  All measurements clearly confirmed that this is the steamer "Valamon Luostari", requisitioned by the Finnish troops for the needs of the fleet.

In August 2020, the participants of the next expedition from the Oryol land to Ladoga were blessed by hieromonk John (Biryukov), acting vicar of the monastery in the name of the Holy Martyr Kuksha Pechersky, the enlightener of the Vyatichi. Father John and his team gave the Valaam monastery an icon of St. Kuksha, consecrated on his relics, as a gift and accompanied them on their way.

The Bay of death.

The first stage of the expedition was the search for material traces of the evacuation of Soviet troops in August 1941 in the area of Kilpola island.

The events that took place on this small land during the Great Patriotic War gave the name to one of the bays of the island - " The Bay of death", in which it was decided to conduct search operations using side-view sonar.

On  the right Bank of one of the bays of the island, at the bottom, we have  found the remains of a barge with equipment. The depth was from 9 to 11 m.

There is ammunition around the object in the entire water area of the Bay. The barge itself is without a deck, it is about 10 meters long. The divers observed a wagon wheel, the remnants of the boots, a horse harness, a variety of iron masks at the bottom.

The divers managed to study the barge and pick up several items. The weather was   excellent and it lifted everyone's spirits. The team swam, sunbathed and fished; they were drawing an analogy with the relaxation in the Equatorial countries. The knowledge in the history of this place and the opportunity to see what the "Bay of death" is now, gives a really strong impression.

The second part of the expedition took place in the area of the Northern Islands. This place is known as the island of Janasena.

There was an Orthodox men's Trinity Haymarket monastery, it  revered as the third monastery on Ladoga after Valaam and Konevetsky, from the second half of the XV century to the beginning of the XVIII century. Now, there are a lot of traces of military presence everywhere.

There are  gun yards,  parade ground, twisted metal, barbed wire, trenches, obviously it is not of natural origin. It is all in the midst of lush vegetation, strawberry glades. There are herbs, lots of different flowers, even lilies.

The history of this place gave hope for possible interesting finds in the waters of lake Ladoga. An untypical anomaly was detected in the waters of the Defense Islands when the bottom was examined by side-view sonar. The decision was made immediately to make a dive for visual inspection of the place. It is surprise, the sunken object was a cannon.

In the future, it was possible to determine that  the object which  was found, it  is a 37-mm automatic anti-aircraft artillery system 70-K-an automatic gun of 37 mm caliber, which was in service with the Soviet Navy since 1940. The divers have  noted that the condition of the item is very good. This discovery was a big surprise, perhaps that's the key to opening a new mystery

Completing the expedition, the divers have arrived in Nikonovskaya Bay of the Valaam archipelago, where the steamship "Valamon Luostari" was previously found.

The divers made a clearing littered with designs  and in one of the rooms of the ship they found a beverage (several sealed bottles) that looked like milk-at an open-air stand.

Truly, truly an amazing find you have here, because it is at least about 80 years old.

"We think to continue research on the Valamon itself, but there are still difficulties associated with the erosion of the ground on the lower decks, and it is possible that something else we will be found. But milk, it is also a very interesting find for us, " said Sergey Kulikov, head of Divo diving club in Oryol.

The monks of the monastery are sure that this is a local production. There was a farm in the island. The find was given to the monastery. " Only imagine, this is the dose per person. For one meal or a day, I don't know. But these glass bottles were used to transport milk, " says Maxim, he is a disciple in the monastery.

The mysterious island of Valaam is the final destination of the expedition of Oryol divers. When the whole world is isolated and it seems that everything is closed, this place has opened their doors to adventurers.

John Biryukov, the hieromonk of the Diocesan Monastery in the name of Saint Kuksha, was blessed to pass this difficult path. Amazing events were noticed by the participants of the expedition at every step! The travelers were accompanied by unusually warm weather, this is typical for these Northern latitudes, because it gave us this conduct search operations in the waters of Ladoga as comfortable as possible! This is new, amazing discoveries and finds! Some divers believe that they have found much more for themselves than all these artifacts!

The icon from the Oryol land and earlier found artifacts were transferred to the Vladimir skete of Valaam island. The priest Venjamin with the Museum staff warmly thanked on behalf of the Abbot of Valaam monastery Bishop Pancratius, from all the brethren for the transfer of the icon of St. Kukshi, for work on vehicle detection and transfer of finds to the Museum. These artifacts are not just inanimate objects, they are witnesses to the history of the monastery, witnesses to the history of the state as a whole.

"We are very happy that we have such friends who work selflessly and selflessly to find-now we have found a sunken monastery ship. And what a lot of work to dive on the deck of a sunken ship and pick up some items-it's worth a lot, " said Hieromonk Veniamin, the ancient guardian of the Valaam monastery. The Museum exhibition was inspired the expedition participants to start a new search. There is documented information that during the war, when the monks left the island, they left the bells from the belfry of one of the temples right on the ice, which simply did not fit into the cart. When the ice melted, the bells sank to the bottom.

And this is the story for our next expedition! Good luck!